Mayfield Arts Cúig studio artists Ailbhe Barrett, Stephen Murray & Angela Burchill will proudly feature in
Beyond: Irish Outsider Art, an exhibition of work curated by Brent Pope.
Opening at The Atrium, Cork City Hall on Tues Nov 17th at 6pm, introduced by Dorothy Cross.
We hope to see you there.

Brent Pope is best known for his rugby punditry on RTEì; yet, a lesser-known passion of his is “Outsider art”. This is a term coined to describe art made by people with no formal training, whose work is created outside the influence of mainstream establishments such as art schools and galleries. It is also referred to as Raw art.

“I’m not an art critic or expert; I just have a passion for this kind of art and the talented people that create it. Many, but not all, are living on the margins of society and may have experienced social disadvantage or exclusion as a result of issues such as mental health, homelessness or learning disabilities”.

Brent regularly travels abroad to Outsider Art Galleries and Fairs and is often asked about Irish Outsider art and where it can be seen. This prompted him to go in search of Ireland’s hidden Outsider artists and realise his dream of showcasing their work in a major Exhibition.  In January of this year, he put out a call for submissions on national radio and the response was overwhelming. With the help of Catherine Marshall, art historian and former curator at IMMA, the final selection was made, resulting is this stunning group Exhibition.
A documentary about the making of this exhibition with Brent where he meets some of  the artists can be caught on the RTE Player  or a DVD can be supplied on request. 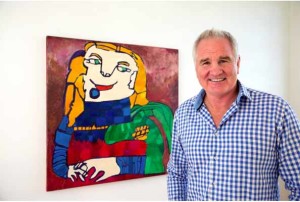